We care about your integrity

We use cookies to make sure al.se works as intended. By browsing the site you approve of this.

Over the last few decades, Atrium Ljungberg has redeveloped Sickla, a suburb of Stockholm, from an industrial estate into a vibrant, living city district. Several large construction projects are already in progress today, and a detailed development plan for the central parts of Sickla has now been initiated. The vision is to continue the development of Sickla into a richly populated mixed-use district and transform large car parks and low rise retail sites into urban neighbourhoods with workplaces and homes, where shops and restaurants breathe life into the streets. The plans entail additional projects spanning some 150,000 square metres.

Over the past two years, Atrium Ljungberg, together with the Municipality of Nacka, has worked to produce a common vision for the development of the centre of Sickla. This vision work has resulted in a joint picture of the future urban district and a proposal for a new urban space plan.

“We are absolutely delighted with the detailed planning work that has now been initiated for Central Sickla. Together with the Municipality of Nacka, we have developed a proposal that we are proud of and that will truly make Sickla an urban, vibrant district with numerous enterprises and homes, side by side,” says Linus Kjellberg, Head of Business Area, Business Development, at Atrium Ljungberg.

Central Sickla, that extends from Marcusplatsen in the west to Kyrkviken in the east, currently consists of large car parks and low rise retail sites. The sites will be transformed into urban neighbourhoods where walkways will share space with higher buildings with office workplaces on the upper floors and restaurants and shops at ground level. In total, the plan spans around 150,000 square metres, corresponding to some 7,000 office workplaces and 500 new homes. The detailed development plan process is expected to take around three years and will include the Municipality evaluating both the content, layout and design.

“We are thrilled that Atrium Ljungberg wants to continue investing in Sickla,” says Mats Gerdau (M), Chair of the Municipal Board. “Nacka is growing steadily and with Tvärbanan, Saltsjöbanan, buses and the coming metro line, Sickla is becoming an important hub. Together, we can develop Nacka to become an even more attractive location in the long term,” Gerdau adds.Several large development projects are already in progress in Sickla today.

The Curanten Health Centre will be completed this autumn, with everything from clinics and dentists to skincare and a baby- and toddler pool. The former wallpaper factory at Marcusplatsen is being converted into a hotel, while a 23-storey landmark building right next to Sickla Station is planned to include offices, restaurants and an entrance to the future metro station. There are plans for around 500 homes in the Nobelberget area of Sickla, the first of which are expected to be ready for occupation this autumn.

“Sickla has a strategic location next to the coming metro line. The new detailed development plan means we are expanding our project portfolio by five billion kronor. In total terms, our project portfolio will then amount to 36 billion kronor, of which Sickla in Nacka and the Slakthus area, Slussen and Hagastaden in Stockholm, account for around 80 percent of the portfolio,” says Annica Ånäs, CEO of Atrium Ljungberg. 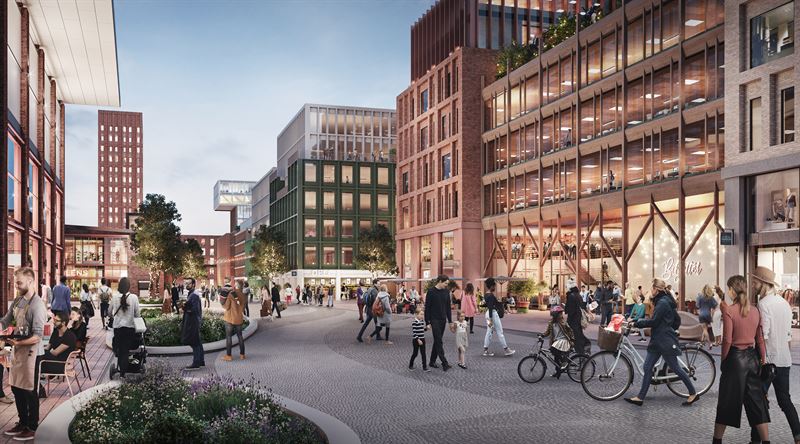 Artist’s impression of the central parts of Sickla. The exact layout and façade designs will be part of the coming detailed development plan and planning permission work.
Illustration: Atrium Ljungberg/ Walk the Room